Not too far into the future. Terraformed new planet Jean.

We're really getting an engineer, Sam?
We need
one, Helix.
With an engineer on board, we may finally get our starship flying again.
We almost got
it flying last month.
Yes. It's a shame the
parade committee made us give their balloons back.

It's time, Helix, to admit the damage to our ship is beyond even my duct taping skills.
Of course, we did buy it used… after the explosion… and the subsequent crash landing…
[!1.5]But it was cheap!
And that's the important thing.

Let's see. You're here for Florence Ambrose, arriving on “The Asimov”. Yes, she's here, but still in cold sleep.
Still in cold sleep? It'll be hours before they thaw her out!
Which gives us plenty of time to go through her personal effects!
[!1.4]Dibs on the batteries!

Can we go help the medical technicians, Sam?
I don't think so, Helix. Defrosting someone from cold sleep is a job only for highly trained personnel.
Set Microwave timer for 30 seconds, press start…

1071-CCN – the number of the ship USS Enterprise (NCC-1701) from the Star Trek series, recorded opposite

Okay, let's see what we've got.
Test equipment, clothes, brushes, data disks, and a rawhide chew toy.
You can find out a lot about people by going through their luggage.
And it's so much more fun than just asking them.

Helix, look over there. Have you ever seen anyone like that before?
[!2.0]DOGGY!
Hmmm. I guess not. 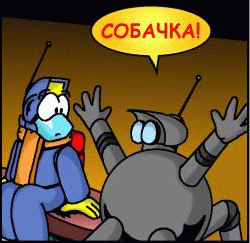 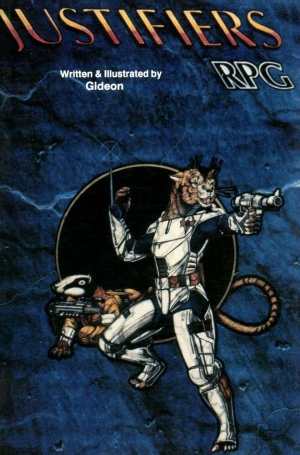 [!1.5]DOGGY!
I am not a “Doggy”, I am a Bowman's Wolf, a genetically altered lifeform created by “Ecosystems Unlimited”.
[!1.5]DOGGY!
His CPU doesn't pick up on all clock cycles, does it?

Hello, I'm Florence Ambrose.
You're the engineer we're supposed to meet! What are you doing in detention?
I need to stay here until I pass quarantine. It was nice of you to come down to wait with me.
No, we're here because of umph!
Yes, it was nice of us, wasn't it?