Wolves are hunters. You probably want to get those clothes now.
I would prefer to, but we can continue shopping if you like.
No, no. Go ahead. Satisfy your instincts.
[!1.5]MADE THE SALE! OH YEAH! WHOO! WHOO! WHOO!
I was speaking to her, not you.
[!0.9]guest

Bye! Tell your friends about me.
Wait. She works for Sam and Helix. I don't want them coming here.
Bye! If your friends ask about your wonderful clothes, tell them you found them in a dumpster!

Now that you've met Triac, what do you think of him?
I like him. He's quite different from other robots I've met.
I've never had a robot argue with me about what I've wanted before. Is that unusual here?
I'm shopping with a talking wolf in a dress. Every robot we pass shouts “Doggy!” at us. I'm probably not a good person to ask what is unusual today.
Point taken.
OPTICS

I used to wonder if humans first domesticated wolves for hunting companions or pack animals. No more.
Oh, look, bricks!
The Jaws of Life

Calculators. On the plus side, they've made it much easier and faster to do math.
On the minus side, it's gotten to where some people can't do simple calculations without one.
Like counting to ten!
Express: Ten items or less.

You okay?
I'm fine. Leg is a little sore, that's all.
So you know, Ecosystems Unlimited does have an outlet in this mall.
I'm not sure I follow you.
I was thinking if you're still under warranty, we could go in and have them take a look at it.

Sorry, I don't come with any warranty. I'm strictly “as is”.
That must hurt your sales. No offense, but people aren't going to spend money on products that aren't guaranteed reliable.
It doesn't seem to have hurt the software industry.
That's different. It's traditional for software to be buggy. People wouldn't know what to do with a program that worked right out of the box.
Uniphase Armouries Interversal

Are there any bugs in your design?
A few, excluding the standard flea jokes. I'm expected to live almost as long as a human, or about 160 years.
But whatever they did to slow my aging down to one/tenth normal also slowed down some other biological cycles.
And if you think shedding once every five years isn't a bug, try working in 40 ℃ heat stuck in a winter coat.

Along with the aging and shedding, we think our reproduction rate has been slowed to one/tenth normal. It will be a year or two before we're sure.
How many of you did they make? A few hundred? A thousand?
Thank you. There's fourteen of us. Three males and eleven females.
That makes NO sense! NONE! Why would a company make something like you?
Maybe someone wanted a dog that could not only download the news but also read them the headlines? 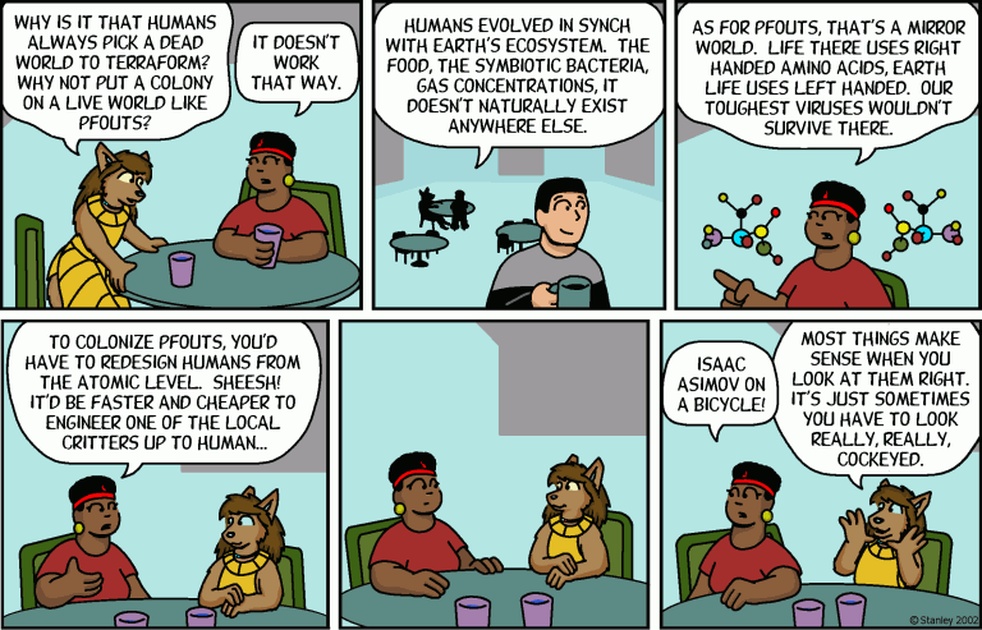 Why is it that humans always pick a dead world to terra­form? Why not put a colony on a live world like Pfouts?
It doesn't work that way.
Humans evolved in synch with the Earth's ecosystem. The food, the symbiotic bacteria, gas con­cen­tra­tions, it doesn't naturally exist anywhere else.
As for Pfouts, that's a mirror world. Life there uses right handed amino acids. Earth life uses left handed. Our toughest viruses wouldn't survive there.
To colonize Pfouts, you'd have to redesign humans from the atomic level. Sheesh! It'd be faster and cheaper to engineer one of the local critters up to human…
Isaac Asimov on a bicycle!
Most things make sense when you look at them right. It's just sometimes you have to look really, really, cockeyed.
Proof sample
↓

Another key issue. Naomi guessed why Bowman's wolves were created. It was a few years before “Avatar”, and the idea was in the air (Robot Spike)