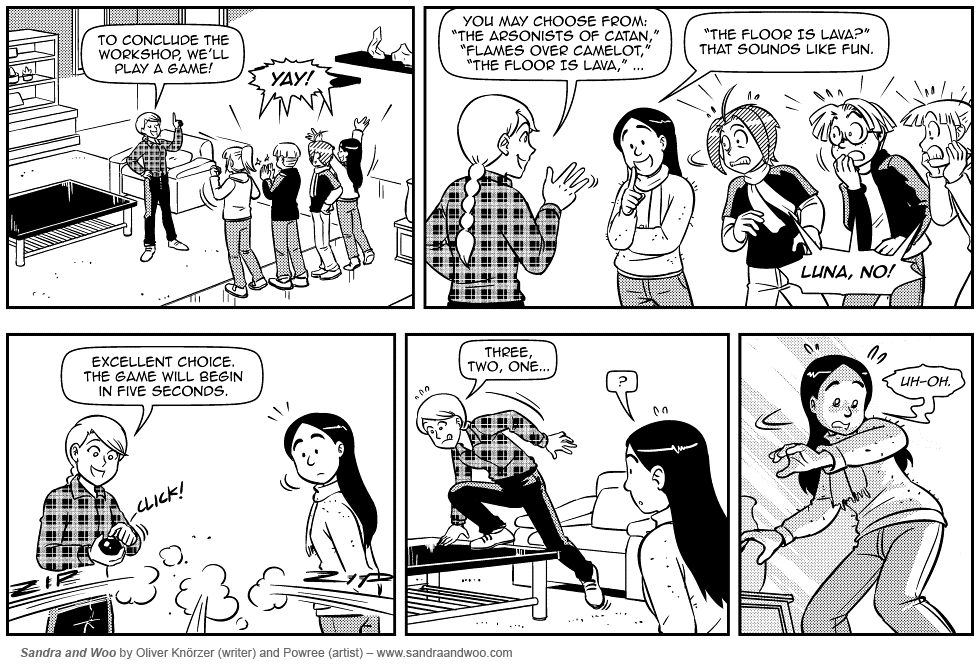 Before you go, I've got a little present for you. But don't open it until you're home.
Thank you.
Weirdest day ever…! 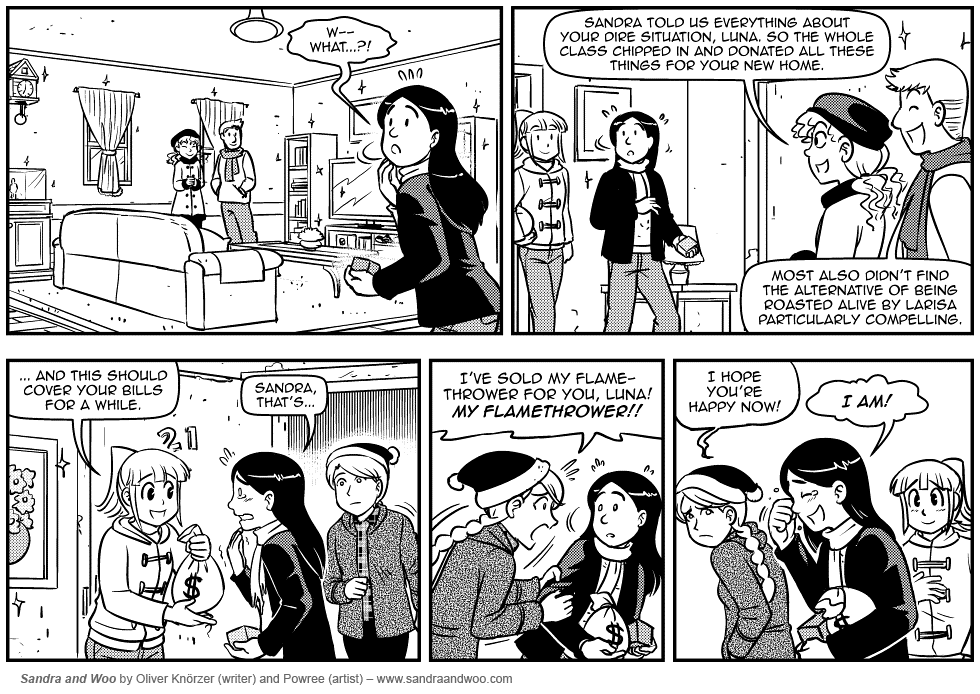 W– what…?!
Sandra told us everything about your dire situation, Luna. So the whole class chipped in and donated all these things for your new home.
Most also didn't find the alternative of being roasted alive by Larisa particularly compelling.
…And this should cover your bills for a while.
Sandra, that's…
I've sold my flamethrower for you, Luna! My flamethrower!!
I hope you're happy now!
I am!

I plan to commission other artists to draw high-quality artwork featuring characters from Sandra and Woo for our Patreon patrons (not necessarily in a 16:10 wallpaper format).

As a first step, I'd like to ask all of our patrons for suggestions what you would like to see. You may provide as many ideas as you like and also make the descriptions as detailed as you like. In fact, I'd even prefer detailed descriptions.

So that you two have something decent to eat, Benjamin's dad will drop off something from his butchery every day from now on.
Wow, thank you.
Are two pounds enough?
Two pounds of meat every day? Isn't that a bit too much?
«A bit too much?»
I must've misheard. Because only a g-o-d-d-a-m-n commie would complain about “too much” meat…!
Uuuuhh… three pounds would be even better, of course.
Goddamn right!

I make the bold prediction that some vegetarians will not like this strip.

The Strip Of The Beast 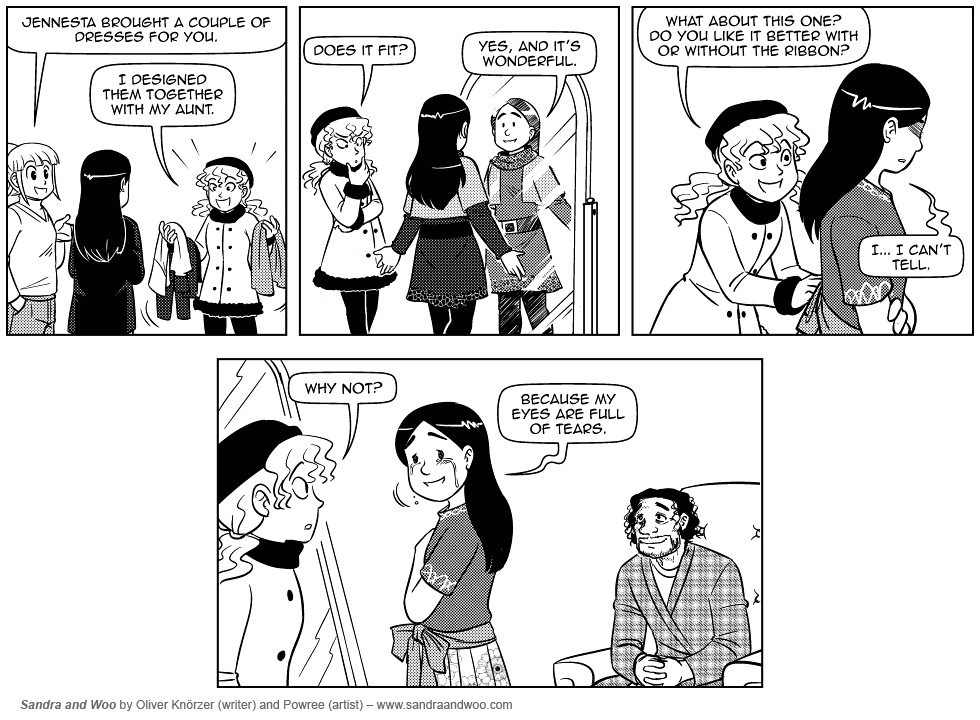 Our 666th strip is about a shy girl trying on dresses and crying tears of joy. 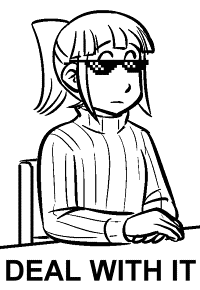 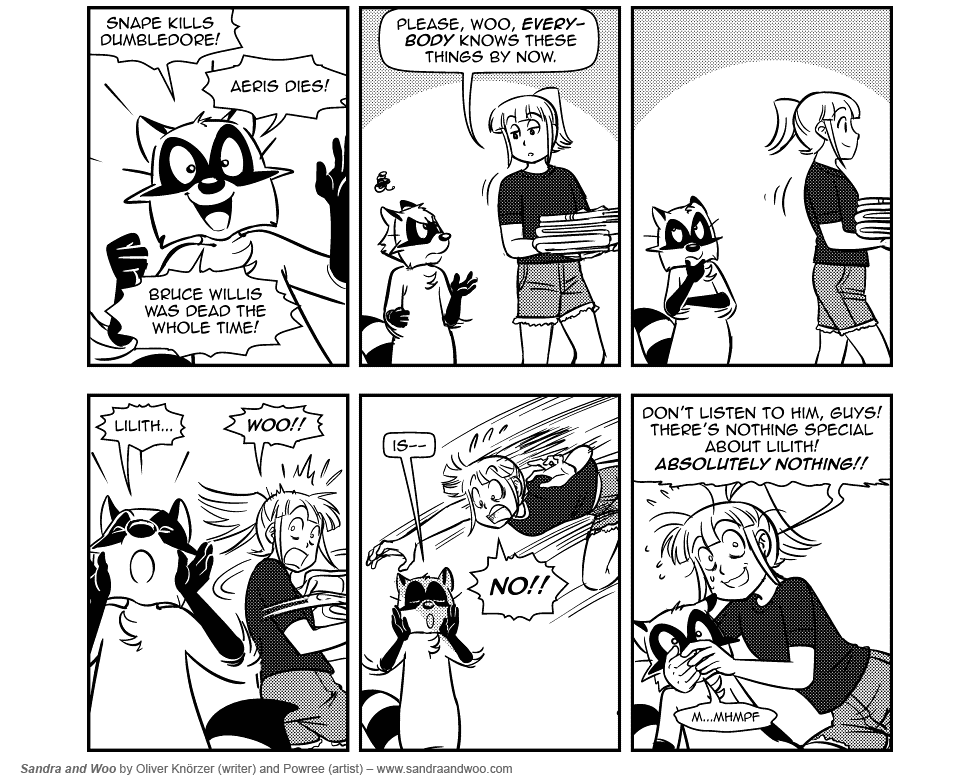 On the one hand, having two separate panels 4 and 5 seems to slow down the action. On the other hand, I don't see how they could have been merged.

Also: Rosebud was the name of his sled!

There is an interesting Kickstarter project of a guy who wants to publish a book containing the first published strip/page of each participating webcomic. 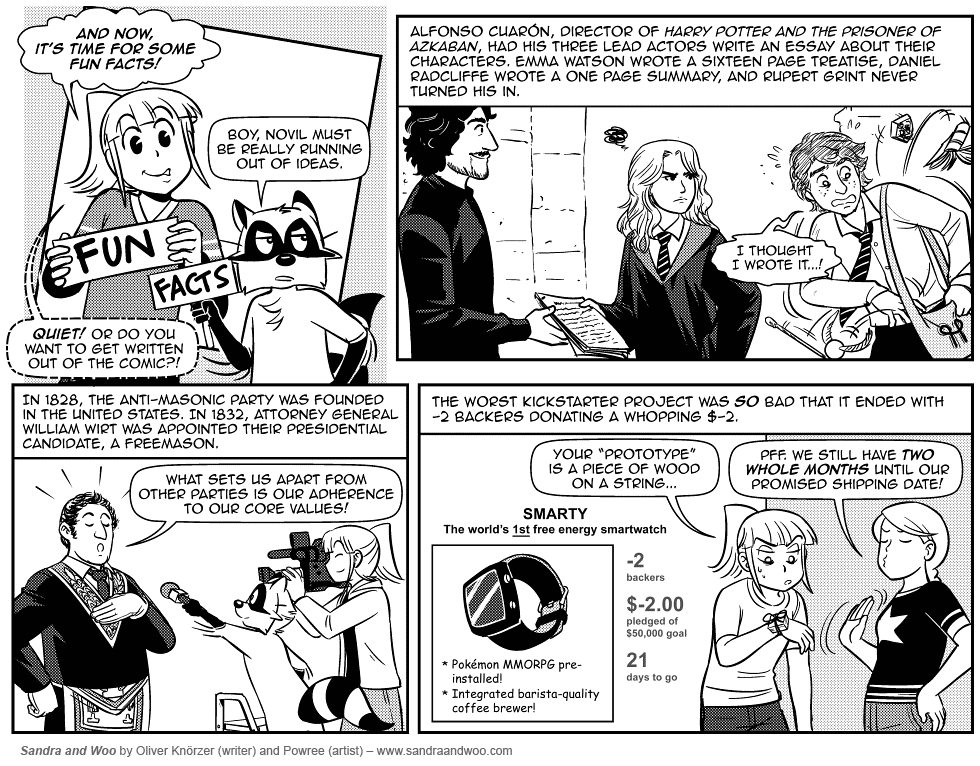 I checked various sources and it looks like William Wirt was an inactive member of the freemasons at the time of his nomination. He definitely held no grudge against them.

The actual Kickstarter project with -2 backers had nothing to do with smartwatches. It was titled “SelfMade Entrepreneurs, LLC * Lifestyle * Branding * Music”. Kickstarter fixed the bug/problem in the meantime, though, and the project page now simply says “0”.