We now look in on Sam and Helix, where by this time they've concocted a clever plan to survive the frigid weather and rescue Florence from the hidden arctic base.
Or perhaps not. Moving right along…
Z
Tribble suit
Too Cute to Shoot
Rocket Powered Inflatable Penguin
Disguise
Me
Shipless reentry
Warm
Splat?
Heat Tape Wrap

Tribble – critters from Star Trek
By the way, I found drawings by Eric Schwartz (Sabrina online) on this comic strip, is it needed somewhere? (Fogel)
We should, in gallery for the comic strip (KALDYH)

You guys did the right thing turning yourselves in. That's all the parts. Turning it on.
Turn it off and back on again.
Call tech support.
We're a secret base! We can't call tech support! 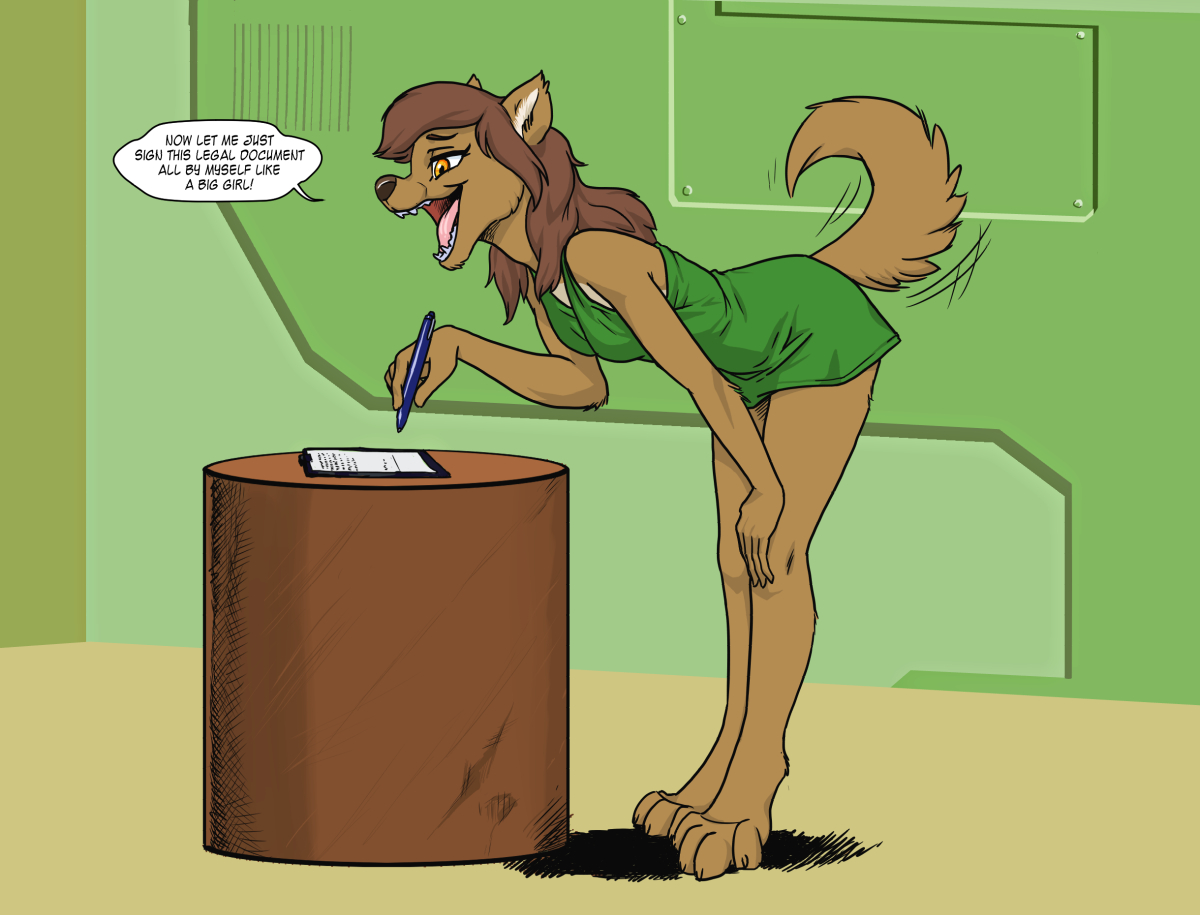 Is there anything on the video record?
No. When you guys came in here, this camera was deactivated and a camera on the plane was given the same I.P. address.
I knew the plane cameras had been added, I didn't notice a room had been dropped until later.
Just thinking. We know this robot is a little nutty. It knew where the base was. It can access our security system.
Why do we think reactivating it is a good idea?

You make a good point. Okay, shutting it down. We'll turn it over to Ecosystems Unlimited Internal Affairs.
Do you want me to carry it?
What? After you broke security protocols and put our base at risk? I'll, OOOOOF! Man, this thing is heavy!
Sure, you can carry it.

How much money did you get offered?
Forty million and financial advice on how to manage it.
This was all my doing. My wife got dragged along. I take full responsibility.
I'll try to protect her. You guys are still going to lose your security clearance. That means you can't work here anymore.
No more minus forty temperatures. No more having all your mail read. No more dealing with mountains and mountains of paperwork.
Well, sometimes you win and sometimes you win.

Two face to face visits in one day. If I don't hurt you, this will be a record! So, what's so important that you wanted to talk in person?
The direct order system is an open invitation to abuse.
Any time there is an imbalance of power, there will be abuse.
What do we do about it?
Really? Humans have been wrestling with that problem for thousands of years and you expect me to solve it in an afternoon?

The direct order system isn't broken. Without a method of control, humans are never going to trust robots enough to give them a chance.
The robots will need it as well. With this many robots, some groups are going to go off the rails rather badly. There needs to be a mechanism for gross correction.
How heavily you use it is up to you. It depends on what humans want A.I.s to be. Tools, slaves, employees, or partners.
That doesn't help. I know people who will support each one of those choices.

That wolf is a person.
Yes. They were designed to see if uplifting native animals could work as colonists on worlds that are inhospitable to humans. Colonists aren't much good if they can't carry the culture of their creators.
I borrowed from my work with them to get the robot neural nets going. Turned out pretty well. Think about it. We require liquid water to live. Do you know how rare that is in the universe?
Oh, Lord. You're using an entire star system as a lab to see if humans can take being a minority.
Just one star system. There has to be some isolation in case things go wrong.

Every robot brain is a little different. Manufacturing tolerances. One neuron may weigh left. Another right. Over billions of neurons, it adds up to a unique individual.
Use direct orders as you see fit. They'll learn from you. You'll be commanding and setting an example. You guys are going to do fine.
For an animal that was uplifted to be a weapon, you have a high opinion of the human race.
I blame your dad. If he had left me in that cage with the military, I'm sure I would have become the proper little monster I was meant to be.

As much as I enjoy the oranges and our talks, I have things to do. Did you need anything else?
No, I think I'm good.
You know, in twenty five years, we've created a population of 450 million. What if someone who wanted to spread a point of view decided to do the same thing? Come up with an idea, then come up with the population to support it?
It would be a whole new working of the population bomb. BOOM, and your meme spreads through the entire city!
Have you ever considered retiring before you break the galaxy?