I end up writing a short arc just to properly introduce a new character on Nerf NOW!! Everybody please welcome Maggie.

I been playing Quake 2 to the side and I'm surprised of how much I'm enjoying the game. It's my 2nd time playing it and while the graphics are dated it's the kind of FPS I enjoyed.

I see how FPS are today, and how FPS used to be and think «am I wrong? Are the modern shooters better and I'm living in the past unable to evolve?»

I can't give a shit about modern shooters with their slow movement speed, reliance in cover and 526 different kind of rifles. I don't care about the «deep» story, or the Michael Bay cutscenes, or pressing X to pay respect.

But given how much the genre sells and how much fun people are having, I guess perhaps I'm outdated.

Now get out of my lawn!

I don't like Winter Wyvern model that much, her buck teeth make me think of a donkey somehow. On the other side, I love the voice and I'll be hearing the voice more than I'd be looking her face so it's the net result if positive.

I found CM arcana to be one of the most well made, but I don't like the little dog. His face remind me of those anthro furry dogs and it's not a nice mental image to have. 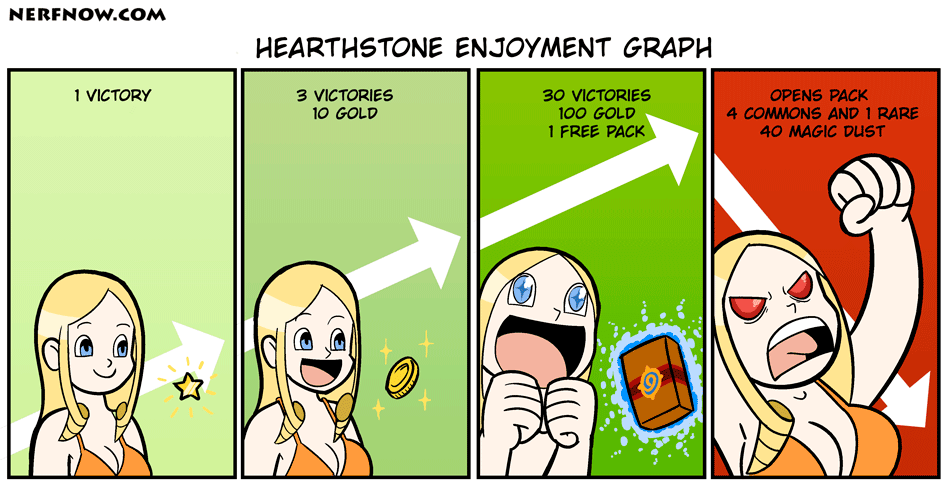 I may need to take some vacation at some point, I been feeling always tired lately.

So have another short rant, took me a bit to finish this one and sadly I have no gas left to write anything interesting here.

Nothing specially bad about Priest quests, but unless you have a proper deck, you'll have a hard time doing any daily quest in Hearthstone.

This said, I find Warrior and Rogue to be the most bothersome to do. Priest used to be bad but I actualy have a good Priest deck now so when I need to do their quest it's usually over pretty quickly.

A little know fact is I'm a huge fan of Homeworld. I consider it the best single player experience I had in a game.

After what happens in the tutorial (avoiding spoilers here) let's just say shit got personal and I really got into the mood of the game.

Outside that, many times I'd just select the «pilot» camera and just follow some of my ships around, enjoying the visuals. During dogfights it was on par with the best sci-fi movies I've saw.

Don't talk shit about Homeworld near me. It's 1000/10, would capture Ion Frigates again.

p.s. I played it without saving during missions, on hard. I was such a HW nerd back them…

I bought Hand of Fate and it was fun, than the game bugged giving me infinite life making it hilarious.

I admit I'm a bit worried about re-playing Homeworld. Sometimes a game is better saved on our memories. I do remember combat was a mess of controlling multiple group of ships to a point if I loaded a game in the middle of a fight I could barely understand what was going.

The game is also unforgiving in the sense your progress is carried to the next stage. Basically, if you play badly and lose too many ships you create a domino effect of being more and more crippled and may end up too weak to win at some point.

Still, from the cutscene art to the voice, from the story to the ship desing I liked it all, and I hope I'll enjoy it again.

I know Homeworld logo is upside down, but it looks better that way for a tattoo.

Lately I've hearing about lots of game withs game-breaking bugs and I'm not talking about light stuff like getting stuck on geometry and having to load… I'm talking about pressing «A» and losing your save games.

I guess at this point, if the game run smoothly from start to finish, it should be enough to warrant an award.

«Yeah, Final Fantasy 36 is boring and cliche, but it run start to finish without bricking my console so it have that»

I remember when I played Homeworld, I captured so many ships the game stopped loading the colors. Any new ship would be rendered black.

As far I know, the game limits how many ships you can produce, but not how many you can have. So by capturing it you could go far beyond the limit. Capturing Ion Frigates was a favorite passtime of many Homeworld players.

Because I was fearing to literally break the game by making it crash I stopped capturing by around 20~ Ions, which was enough for a pretty light show.

My favorite ship was probably the corvette. I just enjoyed the visual and the little cannons thou it get pretty obsolete prety fast.

Special mention for the pilots voice acting. They change their responses based on how bad or good a battle is going, and by their voice alone you can recognize if a specific group of ship is facing a losing battle and react accordingly.

I still remember the fighter pilots saying something like «looking good» if they were wrecking shit and the panicked lines of «Fire! Fire! Our carrier is under fire!

Justice be said, the carrier could endure an good ammount of punishment so I never cared about him being under fire. Sorry Carrier Captain, I'll send some help.. eventually.

If you played Warcraft III, Uther was unreasonably harsh with Arthas, who had to kill a infected city to contain the spread of the undead plague.

This is seen for many as the spark to Arthas downfall which lead to all the events in Warcraft III and for someone theorically wise Uther acted as a big dickhead there.