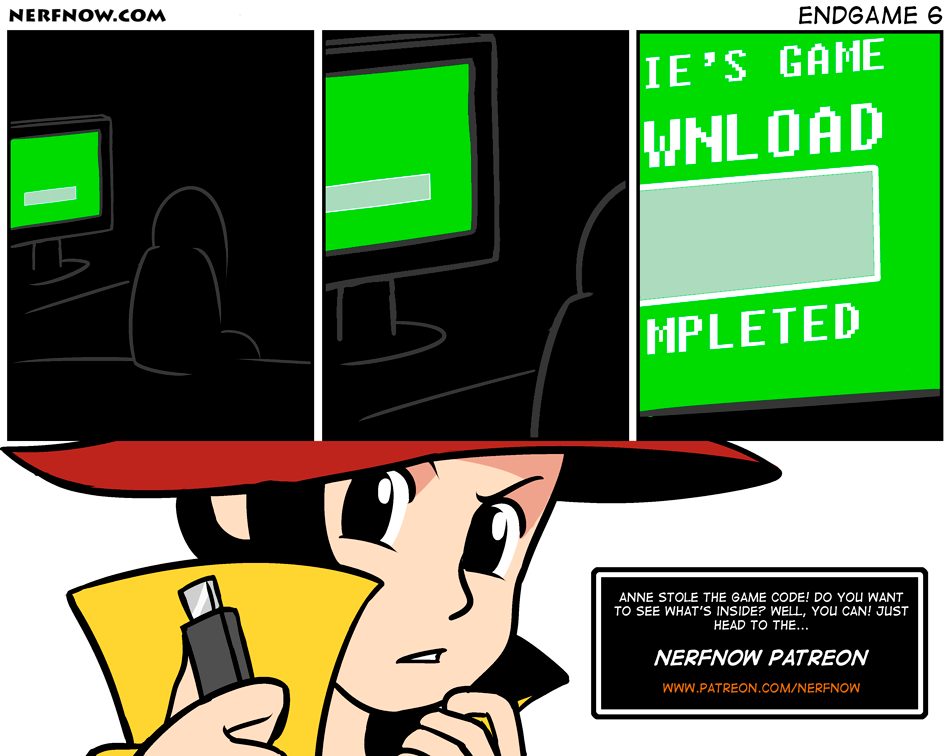 It was hard to keep this under wraps for so long – but here it is! After a long year, I can finally unveil both the Nerf NOW!! game and the Nerf NOW!! Patreon.

Making Nerf NOW!! is a dream come true, but one that demands a lot of time and energy. Having a Patreon gives me the resources I need to keep doing what I love and a platform to give back something special to those who decide to contribute.

Don't worry, Nerf NOW!! is still available for free online, as it was before. However, if you would like to express your support by donating a bit to get access to the game and to other bonuses, this Patreon is ideal for you, and your contribution is welcomed!

Thanks for your continued support, both moral and monetary, to Nerf NOW!! 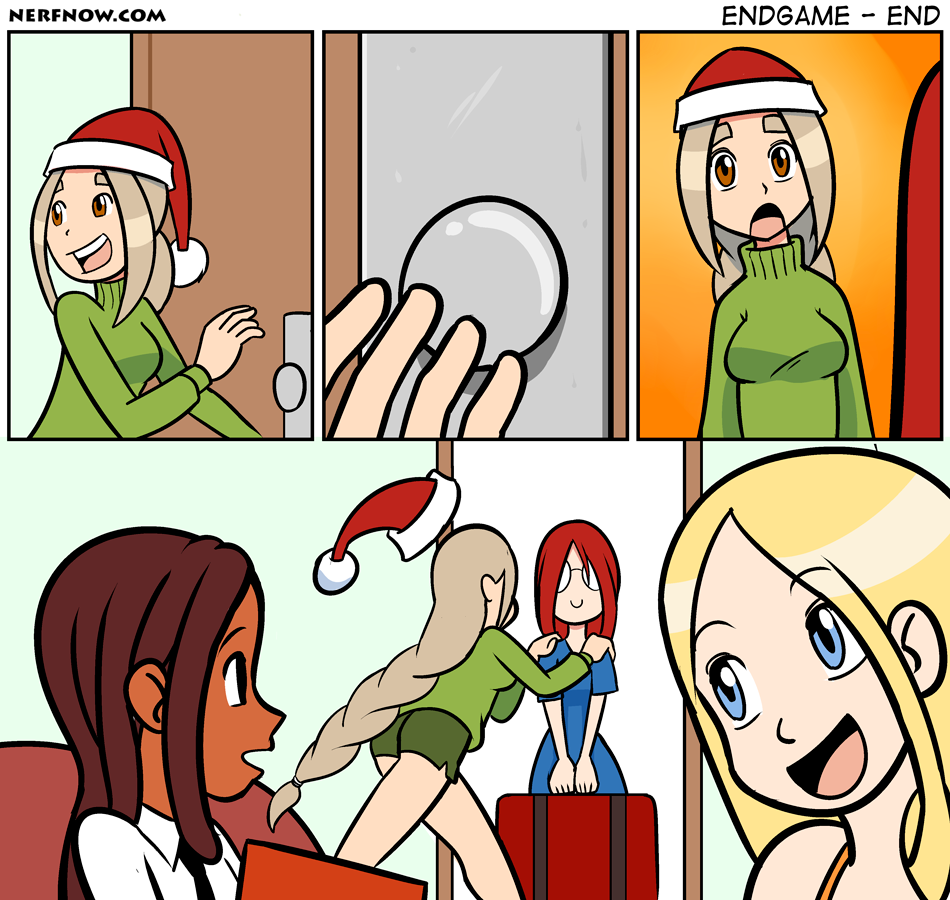 That's it folks, thanks to your support and love Engie is back!

I'm elated by the Patreon and the game positive reception. At some point I really pondered just abandoning the idea. Engie's struggles were, in part, my struggles and insecurities but in the end it was all for the best. We both survived and believe, learned from the experience.

Also, if you enjoyed the game you may want to pay Kyatt a visit. He helped me developing the game and also do comics. You can find more of his work, either game or art, on his site.

Let me thank all you guys who contributed to the Patreon. You guys are the best. The 1k milestone is around the corner so I may need to setup a livestream very soon!

If you guys have any suggestion for a new Patreon milestone, feel free to suggest anything.

For now, enjoy your favorite engineer back. 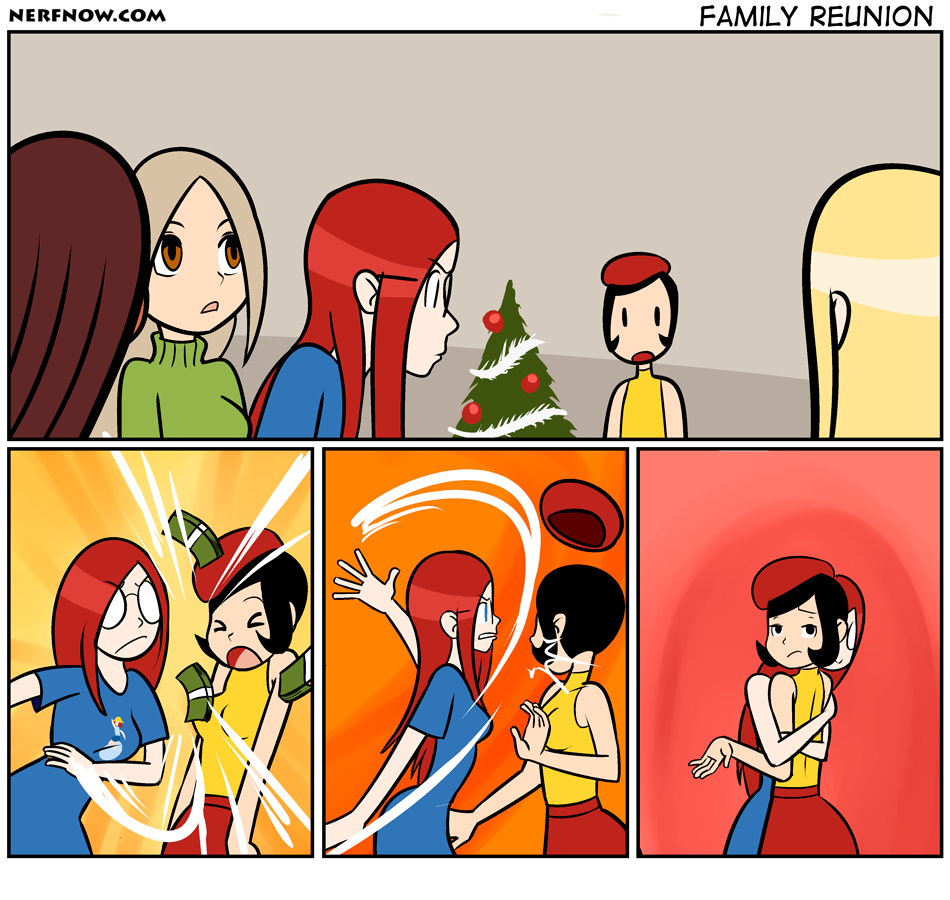 What more to say? Enjoy the festivies folks!

Merry Christmas to all! 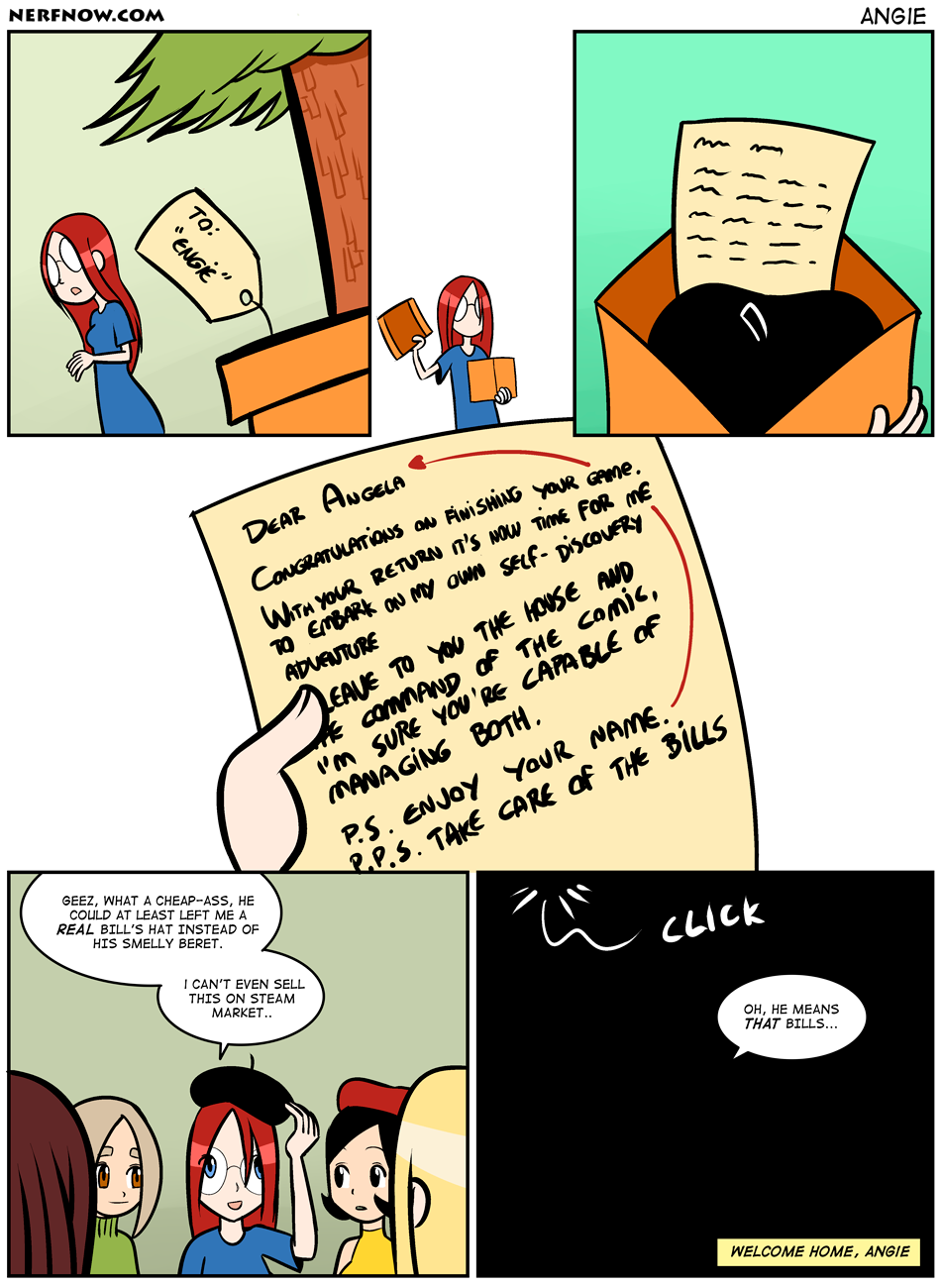 Ok, this arc is now officially completed! This means hopefully no more double pages for a while. :P

But wait, if Tentajo left the comic who is writing this? And who will draw the comic now? Will Angie keep her hair long or cut it? Does she still fits in her old shorts?

Know the answers in the next eps of Nerf NOW!!

p.s. I expect me to write «Engie» instead of «Angie» several times in the future.

I try to not be overly critic about games but freemium «pay to not waste time» are where I draw the line.

I believe they are a viable way to make money, and some people may even enjoy it, but it's like seeing a man trying to sell cotton candy as a viable meal for kids.

On the good side, Sim City 4 is pretty complete and good looking even for today's standards so you can always go back to play it.

Sorry for the late update, broken chair is killing me and its hard to shop in holiday season.

Also, don't forget to look the Sketch Gallery on my Patreon for some interesting stuff. 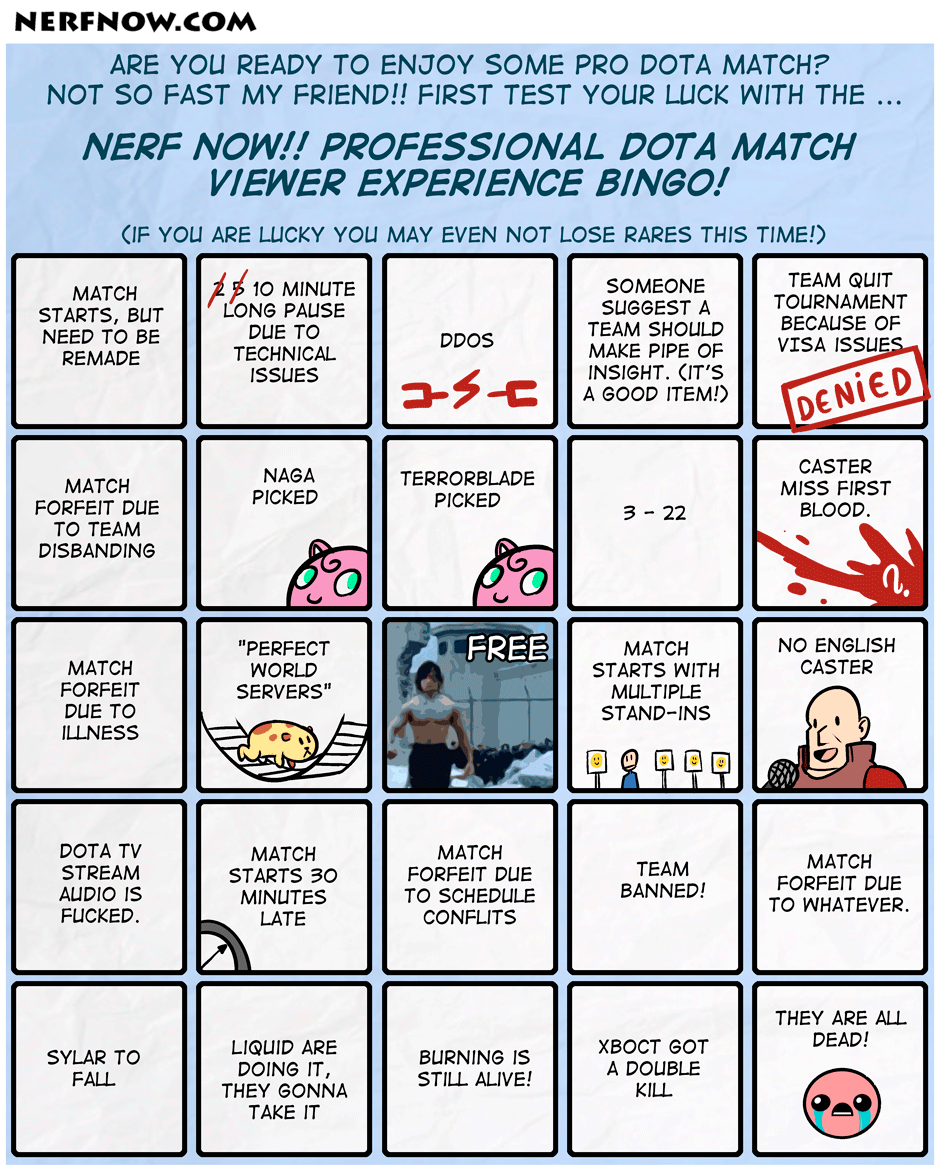 Come to a point I simply don't expect a Dota 2 match to go smoothly. SOMETHING will go wrong. I guess it come with having 10 people playing a hour long match but I'm curious to know how Counter Strike handle it.

Can you imagine how hard is to be Samus? Everybody call her «tough», «badass» and «strong». She lives alone, in a spaceship, with no family, friends or even neighbors.

Is she like that by option, or by lack of choice? Either way is a lonely life with no human contact, jumping from one galactic danger to another. Is she fighting to save the universe, or perhaps, to meet her end?

And after Metroid M, she can't really show any emotion (other than being pissed) otherwise Nintendo is «destroying her character».

Can you imagine she deciding to retire, settle down and make a family? No way Samus! It's just Space Pirates for you! No wonder she got so attached to the Metroid, poor girl needs some company… 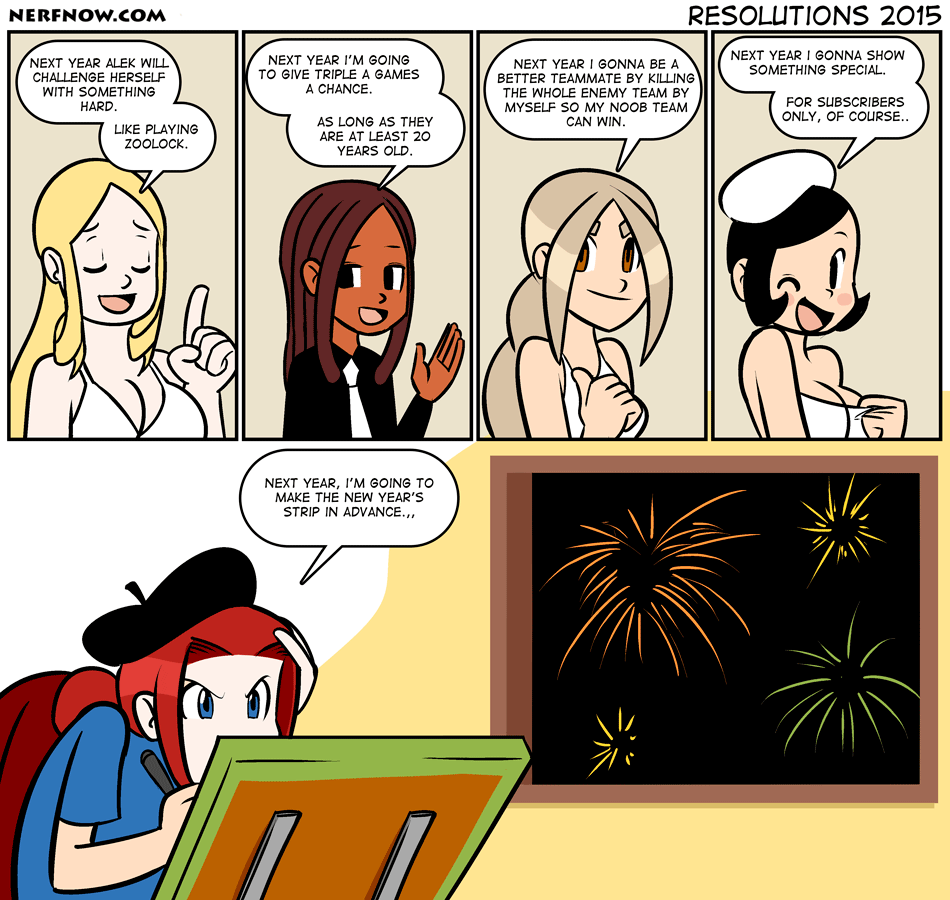 Except to Angie, she has work to do.

Given the Patreon success (thanks guys, you rock!!) I can start trying to make Nerf NOW!! a bit more professional. This means, among other things, buying a professional font which support special characters. It doesn't happens often but when it happens it's a huge hassle. Plus professional fonts have nicer kerning and other stuff which make them look, well.. professional.

I'm also trying a new way to draw the speech bubbles. I'm already using this on this strip, it's a bit slower but I think the final result may be better.

Because people get used to things, I tried to grab a font which looked kind similar to the one I'm using. Here is an example of a previous strip with the new font.

A new year with a new font! Hope you guys like it.

Ok, let me explain what is PROJECT BACKLOG!

I write about what I play, but I usually play the same games a lot. This means the same select few games will get a lot of spotlight while other gems will be left forgotten in backlog hell.

To change that, I'll put a vote here of some games and you guys will pick one, and I'll do my best to finish it. Hell, I may even try to stream myself playing it.

This is not to say I'll 100% make a strip about that game. I may not enjoy it, or can't find a good joke about it, or just prefer to write about something else. However, past experiences says I'll probably make at least one joke about any game I played.

Without further ado.. here is the first PROJECT BACKLOG vote, the theme being «RPG».